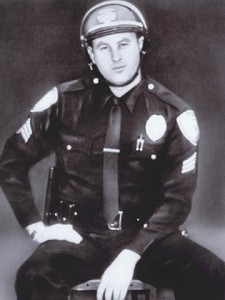 Sergeant Ronald Wise was shot and killed as he attempted to arrest a man for child abuse.

A patrol officer responded to a residence on Fourth Street to investigate a report of child abuse. When he arrived, he found a badly bruised and semi-conscious child. The officer requested that Sergeant Wise respond to the scene to assist in the arrest of the belligerent suspect. When Sergeant Wise arrived, the suspect shot him twice in the stomach. Other officers at the scene returned fire, and the suspect was eventually arrested following a short gun battle.

Sergeant Wise was taken to Santa Monica Hospital where he died the next day from his wounds.

The suspect was convicted of second degree murder, and served only seven years in prison. Following his release from prison he committed a second murder. He was returned to prison where he died while awaiting sentencing for the second murder.

Sergeant Wise had served with the agency for nine years. He is survived by his wife and two daughters.